Recently I headed off on my own for a day hike up Bealey Spur near Arthur’s Pass.  A big anti-cyclone straddled the country and there wasn’t a cloud in the sky. The slightly more mellow autumn light gave a golden glow to the ridges and valleys. There was a wonderful freshness about the morning, and, as I gained height, the spur provided  grandstand views over the wide, braided Waimakariri valley to the peaks of the main divide.

From the little cluster of batches at its base, the spur leads through beech forest, followed by Manuka and Kanuka scrub, then out into open parkland covered in tussock and hebes and dotted with tarns. The view grows grander as you climb higher. After a couple of hours, the track enters more bush and then, in a clearing, appears the charming old musterers’ hut, built in the 1920s when sheep were grazed high up on the ridge, and now owned by DOC. I met three young Brits who’d spent the night in the hut and found it a little hard to sleep with a smoky fireplace and mice scampering over their bunks in the night. 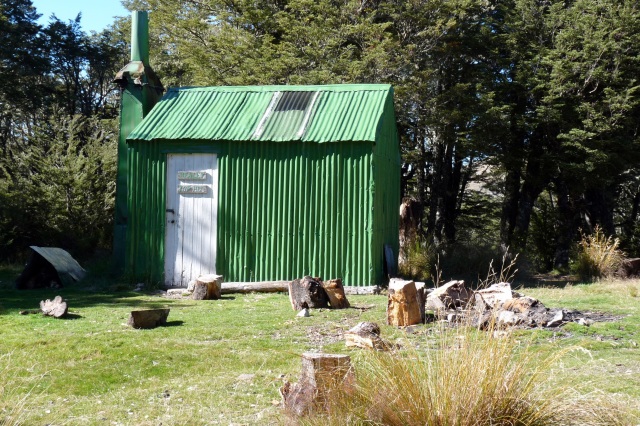 Above the hut is a prominent small peak at 1544m which gives 360 degree views of mountains, valleys, rivers, bush and scree. From there you can look down the full length of the spur past the hut and across to a large tarn on Lagoon Saddle (part of the popular two-day Cass-Lagoon Saddle tramp.) To the north one’s gaze is captured by Mt Rolleston and the dazzling light of the Crow glacier and to the west by the big glaciated peaks at the head of the Waimakariri. It’s very easy to burst out into “How Great Thou Art” up there – especially the lines about looking down from “lofty mountain grandeur.”

But life is also about people, and I didn’t have this mountain world to myself. In the course of the day I met a succession of young people – from Britain, Italy, France, Belgium, Israel, Germany, and the US. (If you want a cosmopolitan experience without the cost of air travel, just go tramping in the South Island back country.) In total, I met 21 people on the track, and only one of those was a Kiwi.

It raised a question or two in my mind. Admittedly, it was a week day when most Kiwis are working and it was a prime month for overseas tourists. But might it be that, while the rest of the world is appreciating our national parks as never before, New Zealanders are taking them for granted? As we become more urban, are we losing sight of the amazing natural world which beckons beyond the city?

And does our Government value our natural world sufficiently? Towards the end of the day, I met an older American couple who told me they were on their third visit to NZ. It was their last full day before flying back to the States and they’d come up from Christchurch especially to spend their final day in our high country. The husband said to me, “You should be charging us a wilderness tax for this.” I said, “I think our Government is afraid that if it did it would lose tourist dollars.” His response was: “This would be cheap at almost any price!”

Meanwhile two Government ministers, Paula Bennett and Stephen Joyce, have recently ruled out a tourist tax to support infrastructure and conservation. This seems bizarre when many tourists would obviously be only too willing to contribute to our national parks and when the Department of Conservation is chronically underfunded.

3 thoughts on “Valuing our Wilderness”